Staying Humble as it Gets Personal by Rob Dixon 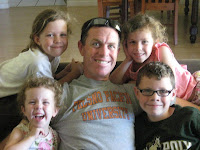 Sometimes, you can't own a value until it gets personal.

At least that's the story of my journey regarding gender equality. Along the way, I've gone from someone who holds a value but has little conviction to someone who is a determined advocate.

God's grace to me was that I grew up in a church where women and men could exercise their gifts equally and without limitations with regard to gender. On top of that, as I grew in my faith, many of my early mentors were women. Still, when I got to college and my faith begain to bloom, gender equality remained something on the periphery, something that I merely valued, as opposed to a "hill to die on." I was no gender equality revolutionary.

But then it got personal.

In my first year as the staff leader of my campus ministry chapter, a local pastor who barely knew me sat me down and told me that because I was allowing women to teach the Scriptures in the ministry I was leading, I would be held accountable for my false teaching.

Wow. The accusation was painful for me, and it sent me into a months-long quest to learn as much as possible about the theology around the topic of women in leadership. I read, studied, prayed, talked, debated and then read some more. And when I was done with that intense burst of learning, my understanding of the Scriptures continued to lead me to the conviction that men and women are to be full partners together in ministry and, in particular, that women are to be free (better yet, empowered) to lead in the Kingdom according to their gifting.

But here’s the catch. When I emerged from this season of learning, I was militant. I mean, if you disagreed with me on the issue, I had no time for you. Looking back, the experience of being rebuked very nearly turned me into a rebuker. Pretty quickly, the issue of women in authority became a litmus test for me: if you agreed with me, we were good. If you didn’t, we had problems.

Thankfully, God provoked a trusted mentor to challenge my posture. My friend sat me down one day and basically said, “Rob, I’m concerned that you’re headed toward becoming like that guy. You need to learn how to hold your convictions with humility.”

“Hold your convictions with humility.” That was the word I needed to hear.

Because we need that posture in order to engage with others around these issues in healthy ways. Particularly when things are unclear or in dispute, we must be humble.

These days, my journey has taken me into the world of thinking about my male privilege. Specifically, I'm considering how Christian men ought to respond to the reality of our socially-granted privilege and power. For the last 6 months, I've been blogging on this stuff twice a week, every week at challengingtertullian.com.

As I've gone along, I've experienced a wide range of emotions. This stuff is complex! At once it's been interesting and encouraging, uncomfortable and vexing. 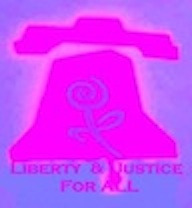 In this blog, we seek to spark reflection & dialogue around how to more fully enlist our faith communities to continue the incredible global momentum underway today behind women’s equality & human rights. As Sheryl WuDunn, Nicholas Kristof & others describe, we believe healing our world's gender wounds is our generation's chief moral, spiritual, & humanitarian concern. Change is happening to gender-balance our world, but so too are deeply entrenched forces of resistance & imbalance which at times seem to be undermining progress. The liberty bell is a reminder not to be complacent, too patient, too quiet, but rather to bravely & boldly seek to transform the deeper roots of our world's gender imbalance & together drive a wedge in the wheels of injustice that continue to undermine the full human agency & equality of girls/women. Each month we will approach the topic from a different theme & invite you to chime in as you are inspired! No need to over-wordsmith or have fully baked answers! An open mind & open heart will do! a healthy dose of grace & humor a major plus! as we seek to grapple together with some of the hidden contradictions beneath the surface of our religious traditions that need to be addressed in order to more fully enlist our faith traditions in the unfinished business of creating a more gender-balanced world.

Emily & Julie
The Nielsen Sisters
aka The Grimke Sisters
(or is it Julie & Emily? : ) not exactly fashion plates but powerful reminders to connect with our "inner suffragist" & work in their spirit to continue to advance the dream of Liberty & Justice for All) www.­nps.­gov/­wori/­historyculture/­grimke-­sisters.­htm

The arc of the moral universe is long, but it bends towards justice.

We are taking a card from the suffragists/abolitionists who used the liberty bell as a symbol to advance their cause as a simple matter of Establishing Liberty & Justice for All. 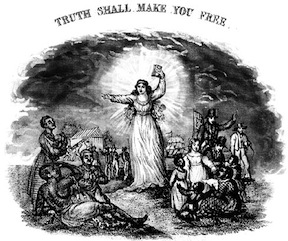 The cover of a "gift book" called The Liberty Bell created by the Boston Female Anti-Slavery Society in 1839. Their work is our work!
What is the "Women's Liberty Bell"?
Katharine Wentworth Ruschenberger commissioned a replica of the Liberty Bell to help spread the cause of woman suffrage in Pennsylvania. The inscription on the bell likened the denial of votes for women to the tyranny of English rule which fueled the American Revolution. It differed from its brother only in that it lacked a crack and bore the inscription, Establish Justice. The 2,000 pound bell became something of a sensation. It toured 5,000 miles in a flatbed truck built specifically for this purpose, criss-crossing Pennsylvania. It eventually appeared at suffrage events in Chicago and Washington, DC. Its travels were marked by large crowds and band-led parades. Miniature versions of the bell were sold to defray the cost of its tour. It was a media darling. The bell’s clapper was chained into silence until the passage of the 19th Amendment. In a ceremony held in Independence Square in September, 1920, the bell was raised and rung by a woman dressed as Justice, signaling true liberty in the United States: suffrage for women. The Justice Bell now resides in the Washington Memorial Chapel at Valley Forge." http://www.nwhm.org/blog/we-all-know-the-liberty-bell-but-have-you-heard-of-the-justice-bell/
The Women's Liberty Bell is a symbol worth resurrecting today to connect the unfinished women's movement back with the high-minded ideals of our country's founding...
Women's Liberty Bell reminds us that we stand on the shoulders of many brave heroines (& their male allies) who heard deep within their souls the ring of liberty...
The Women's Liberty Bell reminds us not to take for granted as a done deal society's progress toward full human equality...
The Women's Liberty Bell reminds us that "ideas have consequences" (Plato) & that the last frontier of the women's movement is on the level of ideas: sifting through lower ideas which categorize/limit/prescribe women's agency/"role" as anything lesser than Liberty & Justice for All...

Empowering women & girls empowers us all.

Societies with greater equality between men and women are healthier, safer and more prosperous.

Another world is not only possible, she's on the way and, on a quiet day, if you listen very carefully you can hear her breathe.

In the last half century alone, more women and girls have died as a result of gender discrimination than all the men who died in all the battles of the 20th century, and more girls were killed in anyone decade than all of those who died in the genocides of last century. Did you know that over 10 times as many girls are currently being trafficked each year than African slaves were transported during the height of the Trans-Atlantic slave trade?

Half the Sky: Turning Oppression into Opportunity for Women Worldwide

March: Through your lens, how is your faith tradition, intentionally or not, continuing to keep women in the proverbial “back seat of the bus”? Where is gender balancing happening? What is yours to do?

April: Enlisting male allies: What shifts have occurred in your masculine gender/faith journey that have enabled you to get you onboard as a partner in the work of gender equality?

May: How do lingering patriarchal gender "roles" undermine our own humanitarian objectives?

June: How are humanitarian organizations around the world working to bring the church/religious institutions more fully on board with human equality?

July: How can men's ministries & marriage programs encourage both men & women to "step up" together side-by-side as equal partners?

Aug: How are faith-based marriage & parenting curriculums/programs sending both empowering & disempowering messages about how to be male & female together?

Sept: How are seminaries & theological schools helping/hindering to teach a high view of Scripture which moves beyond literalist interpretation of troublesome gender passages?

Oct: How is the younger generation today approaching gender & leadership?

Nov: How are faith-based parenting resources helping/hindering both girls & boys to develop their full human potential?

Dec: What role is inter-faith dialogue having around the world to help move our religious traditions beyond fundamentalist, hierarchical applications of our Holy Books to embrace a spiritual ideal of human equality that lies at the core of all of our faith traditions?

Jan: How are faith-inspired women of faith rising up to heal our world & build bridges of peace?

Feb: How does working together across secular/religious lines help to continue to build global momentum behind the ongoing work of gender equality/balance?